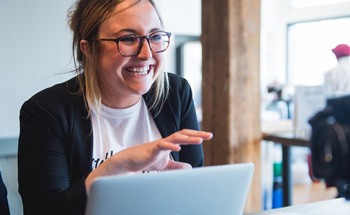 The Surprising Secret to Being a Great Writer

Writing is Just Talking to Paper

People speak in short sentences. That’s the same way we should write. Short, simple words. No long paragraphs. No long sentences. Many young writing students write in long sentences. One after the other. If we talked that way we would bore the hell out of anyone trying to follow what we were saying. Too many words. Too little time.

Helayne Spivak, the only woman to be the Creative Director of two agency networks, says, “Writing is just talking to paper.”

Often student writers use words they never use in conversation. No one is going to whip out their smart phone and Google a strange word. Here’s a test to prove this point. Imagine you are walking down a Manhattan sidewalk and you see a person coming directly towards you. You just know instinctively that this is the person you have been waiting for your entire life. What do you say?

Or this. Hospital intensive care room. You are sitting beside the bed of someone very dear to you. What would you say? How?

The obvious point is that in every important situation in our lives, we speak simply. We should write the same way.

How do people talk? Well, what people?

Hemingway and Gellhorn, the American novelist he later married, first met in a bar in Key West. Martha Gellhorn told Hemingway she was a writer. Hemingway asked to see her critic’s review, if she had one. She showed him a newspaper clipping that she kept tucked away in her purse. The critic who had reviewed her book said Gellhorn “captured the language of the Appalachian region”. Gelhorn brushed off the compliment and said, “It’s not my dialogue, it’s just their speech. Hemingway told her “The trick is to write how people talk. We just don’t listen.”

In the mountain region of Appalachia the people have their own dialect. Directly from the Ulster region of North Ireland, a mixture of Scots and Irish. Along with their dialect they brought their fiddle music, love of clogging dance, as well as their hot temper and moonshine. Their language is equally colorful. If they say night, the word comes out ‘niiiiite’. And right comes out ‘riiiite’. ‘Clever’ means neighborly or accommodating. ’ Several’ doesn’t mean two or three, but 20 to 100 people. ‘Very well’ means ‘so-so’. Sour milk is called ‘blink-back’.  A reference to witches and the power of the ‘evil-eye’.

It is important to note that the “bad English” used by Appalachia was once the language of the nobility of England and Scotland. Isolated by their mountains, the Appalachian language remained intact with old speech forms.

Yet a few miles east or south of Appalachia out of the mountains we have a gumbo of accents and words. From one part of town to another.  So many cultures. A hundred miles north or south and you’ll find dozens of new words and different ways of putting them together.

All that’s interesting but as a copywriter, how do we write to so many differences? We were taught to write in midwestern English. That’s seems sensible. Practical. Practicable.

As a copywriter, what we write is usually to sell a product or a service. So do we use midwestern English if we’re selling car insurance to second generation Cubans in south Florida? Even if we could jazz up our copy with a few Cubanisms, should we? Of course that question is ridiculous.

Has the time come, because of the versatility of the web, that we can write in one dialectal style and that style be converted to appeal to multiple linguistic variations? No. Not yet. But soon. Will the smart phone be so smart that instantaneous translation will allow us to converse in a language we don’t speak? Will all our ads be multi-lingual? Or even multi-dialectal? Of course they will.

In the meantime, what should a aspiring creative writer do?

1. Listen to people talk. How is the language different based on where they are; a hospital waiting room, auto repair shop, long line at a concert.

2. Have conversations with people far outside of your “group”.

3. Use your brain or your smart phone to record everything, everybody.

Learn more about our Copywriting Program.